Where My Girls At?!: Women of Southern Gothic Lit

Right, so yesterday I saw a short article posted by The Irish Journal of Gothic and Horror Studies which appeared in Publisher's Weekly (read that HERE) entitled "10 Best Southern Gothic Books."  Because I love Southern Gothic lit, I of course clicked through...and promptly got hocked off.  Out of ten books, there was ONE woman.  ONE.  Come on, guys, really?  Off the top of my head, I had five and then thought of three more nearly immediately.  Not hard. Ugh.


Don't get me wrong.  I loved quite a few of the books they listed, Dennis Covington's Salvation on Sand Mountain, for instance, which was one of the best Southern books I've read in years.  But there was just no call for leaving all these women out.

Anyway, this list is absolutely NOT an end-all-be-all.  As I mention in the companion video (which you can find HERE), this list is way too white-washed, but I realized I don't know any Southern Gothic writers who are women of color.  I almost included Toni Morrison and Zora Neale Hurston, but I'm not sure they would actually fall into this genre.  Any suggestions for Southern Gothic lit by women of color (or anyone of color for that matter) would be greatly appreciated.

[EDIT:  Upon further research and reflection, I absolutely should have included Zora Neale Hurston on this list, and I have added her below.  My apologies, Ms. Hurston.]

With that said, here's my short, quite incomplete list:

1.  Flannery O'Connor:  She was the sole woman on the PW list, and she is the high priestess of Southern Gothic in my opinion.  Her story "Good Country People" is hands down one of the weirdest and best short stories EVER.  Also must read:  Wise Blood (her sole novel) and any short story collection (e.g. A Good Man is Hard to Find and Other Stories).

2.  Dorothy Allison:  Bastard Out of Carolina and Trash

3.  Carson McCullers:  The Heart is a Lonely Hunter and The Ballad of the Sad Cafe and Other Stories

4.  Harper Lee:  To Kill a Mockingbird (and I would bet Go Set a Watchman since it's set in the same universe as TKAM)

5.  Eudora Welty:  The Optimist's Daughter, Ponder Heart, and Why I Live at the P.O. and Other Stories...I hesitated to put her on this list despite the clear Southern Gothic nature of her writing because she was once quoted as saying about Southern Gothic, "They better not call me that!"  Sorry Eudora, had to do it.

The lat three here are modern horror novelists, but their work is definitely Southern Gothic.

6.  Anne Rice:  The Vampire Chronicles and Violin, although most of her work would fall into this category

7.  Caitlin Kiernan:  The Red Tree, Th Drowning Girl, and about a billion short stories in various and sundry anthologies

8.  Poppy Z. Brite (now known as Billy Martin, although all of these were published under Poppy Brite):  Wormwood, Lost Souls, Drawing Blood, and Exquisite Corpse

[EDIT] 9.  Zora Neale Hurston:  As noted above, I almost included her in the video and list, but I was unsure she fit.  After doing a bit of searching, I realized that she is included in the American Library editions of Southern Women writers, and thought of as Southern Gothic at least in some circles.  That's good enough for me.  Read:  ALL the things, of course, but particularly Their Eyes Were Watching God, Mules and Men, and The Complete Stories.

As I said, this is by no means all-inclusive, and I welcome suggestions.

One of my favorite booktubers, Sam over at Novels and Nonsense, did this tag  a couple of weeks ago, and although she is a much more ardent lover of classics than I, I definitely number a bunch among my favorites.  If you'd like to see the video, complete with plenty of explanatory tangents:  Classics Tag Video

So here we go!

1. An overhyped classic you really didn't like:
Catcher in the Rye by J.D. Salinger & anything by Jane Austen (seriously. I really hate her work)

2. Favorite time period to read about
Victorian England...if only because I love steampunk time travel and sci-fi

4. What is the most embarrassing classic you haven't read yet
[Note:  I am not actually embarrassed about this.  I don't subscribe to that whole notion of "if you        haven't read this particular set of books, you suck and are a moron."  More about that in another          post.]
The Handmaid's Tale by Margaret Atwood


6. Favorite modern book/series based on a classic
The Triologia Victoriana by Felix J. Palma

7. Favorite movie version/tv series based on a classic
The Time Machine [Note:  The original version from 1960 starring Rod Taylor]
Little Women [both the 1949 version starring Elizabeth Taylor as Amy and the 1994 version                      starring Winona Ryder as Jo]
Bride and Prejudice [Yes, I hate Jane Austen, but I LOVE musicals and Bollywood.  This is one of            the only 2 good things that came out of Austen's work.  The other is zombies.]

8. Worst classic to movie adaptation
The 2002 version of The Time Machine [This was an abomination unto the time travel gods.]

9. Favorite edition(s) you'd like to collect more classics from
There are 3 sets I think are gorgeous, but I don't want the entirety of any of them.  Weird, I know.

10. An underhyped classic you'd recommend to everyone
I chose 4:

Well, there ya go!  I'm trying my best to do coordinating blog posts with my videos, but you see how well that is going.  Oh, well, A for effort, yeah?

The lovely Sarah over at CrawfordReads on youtube tagged me to do the Sisterhood of the World Bloggers Award Tag.  She asked me 10 questions, I responded with a video of my own and tagged 10 mew people with new questions.  The video in which she tagged me is at:  https://www.youtube.com/watch?v=l08KZgaiKs8

And if you want to watch my response, go here:  https://www.youtube.com/watch?v=T_4nhR9rWpI 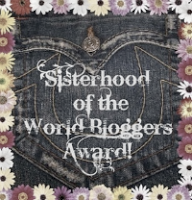 In other news, I swear I'm trying to remember to post over here in tandem with my Booktube videos, but as we see school and my general forgetfulness has prevented that from happening.  I will endeavor to do better, guys.  In the meantime, check out my channel and all the awesome Booktubers I follow. Books!!!  How could not love it?
Posted by Dr. B-G at 7:12 PM No comments: